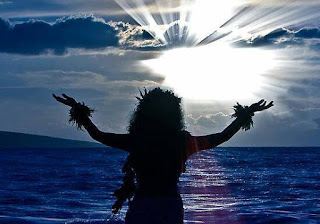 Brave, athletic, strong, passionate, caring and centered in herself, I saw her as a forerunner of the modern woman. It was a tremendous gift to be given the opportunity to visit the cave where she was born. It took the entire crew of six members of the Hana Canoe Club to paddle me to her birthplace.  We pointed the tip of the outrigger into the oncoming waves that sloshed over the bow and paddled through the foaming surf to the protected shallow waters lapping at the lava rocks beneath  the cave where she was born. I climbed the jagged black lava to a path that led to a large opening with two indentations big enough to accommodate a human.  Her mother enjoyed a lovely view of Hana Bay and the green mountains floating on the horizon. Offerings of flowers were placed in front of the openings. Before leaving I floated in the waters at the foot of her cave considered to be healing by those who come here for sacred ceremonies.

. While Ka’ahumanu was still a baby her parents fled from Hana to Hawai’i to the Big Island where they lived in royal comfort. Wai-nani,A Voice from old Hawai’i my historical novel (1750-1819) is inspired by the life of the precocious Chiefess Ka’ahumanu. To some she is remembered as the” loving mother of the people” and to others she is the “flaw that brought down the chiefdom.”

Written With Warm Aloha In the Name of Ka’ahumanu-Linda Ballou
www.LindaBallouAuthor.com

Posted by lindaballoutalkingtoyou at 5:00 PM