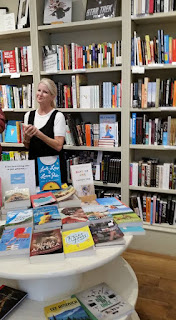 With so many independent book stores biting the dust, it was very exciting to learn about 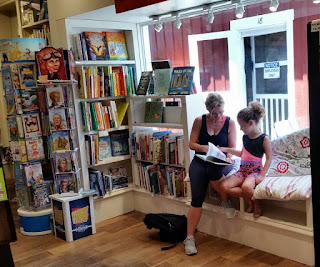 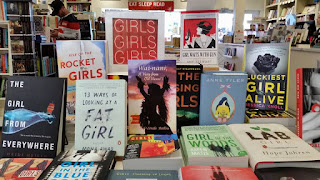 the Diesel Book Store that is alive and well in Brentwood. The store is buzzing with customers eager to find their next good read. Manager Lynn, keeps displays revolving and shelfs refreshed with the newest best sellers. Super supportive of local authors like myself, she was eager to put all three of my books on display. It is great to see such enthusiam for print books. I have a kindle and it is fine for travel, but I love holding a book in my hand.

Wai-nani sits prominently on the GIRLS, GIRLS, GIRLS table dedicated to female protagonists and memorbable women in history. Wai-nani, inspired by the life Ka'hahumanu who rose to become the most powerful woman in old Hawai'i deserves a seat at this table.

I am so proud that my travel collection, Lost Angel Walkabout, just got a ringing endorsement from Julie Rosendo, Producer of the Emmy Award Winning PBS show Travel Scope hosted by her husband Joseph Rosendo. Makes my heart sing to get recognition from these top professionals in the travel world.
The Cowgirl Jumped Over the Moon received recognition in the 2015 Indie Excellence Awards. Horses, Romance and Adventure! " Who could ask for more from a book?" says publisher Jacqui Broderick who lives in Ireland AKA horse heaven.

The Brentwood Country Mart at 225 26th St in Santa Monica is a great place for lunch on the patio where ocean breezes keep it cool all year round.  Many gourmet choices along with baskets of chicken and ribs make this a great place to feed body and soul. 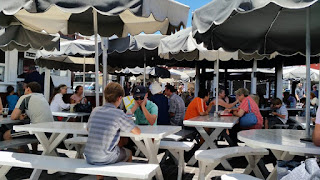 Adventure-travel writer, Linda Ballou, a host of travel articles on her site, along with information about her travel memoir, Lost Angel Walkabout-One Traveler’s Tales, her historical novel Wai-nani, A Voice from Old Hawai’i and her latest action-adventure novel The Cowgirl Jumped over the Moon at-www.LindaBallouAuthor.com.

Subscribe to her blog www.LindaBallouTalkingtoyou.com and receive updates on her books, and travel destinations.

Posted by lindaballoutalkingtoyou at 10:11 AM No comments:

It’s late May in Chobe National Park, Africa’s third largest wildlife preserve, and creatures great and small are fat and sassy. Tall golden grasses are plentiful. They are the favorite of the many herds of massive elephants and a host of antelope along with Cape buffalo, zebra, and more. The sable with its handsome striped face, the kudu with its elegant curled horns, and the seemingly thousands of impala all glow with good health. They look at us in our open-air, tiered safari vehicle with curious eyes as we trundle along sand tracks. 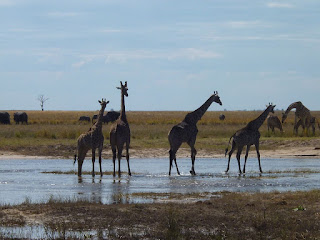 Giraffes stare with soft, round, chocolate eyes sheltered in three-inch lashes posing nicely, and then turn to splash through the waters of the Chobe River in a gangly display of limbs and towering necks as they gallop away.
A saddle-backed crane with his striking red beak pokes through the reeds along with gray crowned crane and spindly avocet.

The animals show off their young this time of year. Month-old elephants hide beneath mother’s belly while the big-eared offspring of the baboon ride on their mother’s back. The proud father of young impala herds his harem away from us as they kick their heels high in the air practicing getaways from predators. A parade of gray giants cross our path to reach the clear waters of Chobe where they linger in the green grasses. After a night’s hunt, a husky, black-colored male leads a pride of fourteen lions to shade where they will sprawl for the day. 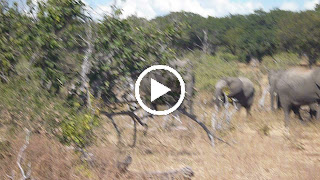 It is winter and the temperatures are mild with a warming sun shining brightly in cerulean blue skies. Bush willow glows golden and the mopane trees are still dressed in fall colors of yellow and orange. This perfect safari day began with a chill that crept into my luxurious tent home in the wee hours. I awoke to a herd of water buffalo just outside my door tramping through the camp and sounding like an army on the march. The drumming of our escort guide at 5:30 AM signaled time to rise.
It was hard to leave my comfy bed set upon teak wood floors and sheltered under a pitched thatched roof, but it was time to join the rest of the guests for breakfast by a warming fire in the boma.

Like all four of the bush camps on the journey with Overseas Adventure Travel in Botswana, Zimbabwe, and Zambia, communal meals are enjoyed buffet style in the main lodge.
Each lodge has its unique flavor and rests in a different ecosystem to be explored. The Baobab Lodge opens to a valley where animals come to drink at a watering hole. It is a ring side seat for searing African sunsets reflected in the Chobe River.

Meals in the camps are a healthful mix of fresh vegetable salads prepared in creative ways. Fare included fish in a tasty curry sauce with rice, tender beef stew with roasted potatoes, and lemon chicken with fresh fruit and cheeses for dessert. We are offered tea on our drives, cool wash cloths upon our return, and a welcome from the staff who do all they can to ensure we are treated like royalty.

A short flight took us to the Okavango Delta, a 6,000-square mile mosaic of open savannah, flowing rivers, floodplains, and lagoons. The Banoka camp overlooks a champagne colored meadow where all manner of wildlife from elephants to hippos, to the endangered wattle crane busy spearing frogs, to vultures riding high on thermals enjoy their freedom.


Here we fish-tailed through deep sand in our safari vehicle with eyes peeled for game.
Our guides, Cowboy and Wise Guy, stopped the land rover to read the tracks in the road. A big cat had been active in the night. We were off on the hunt! Cowboy charged through thickets and deep gullies, crying “hold on!” when he hit brush that cracked and snapped against the bottom of the jeep as we powered on. Unlike Chobe, a national park where you may not leave the roads, our lodge in the delta rested in the private reserve leased from the Kwai villagers leaving us free to wander. We followed the tracks bouncing like we were riding a bucking bronco for about 45 minutes. Finally our guides circled around a pride of five lions resting after a night of hunting.
The stately fawn-colored male with a dark brown mane stared at us with disdain. His mate and their two adolescent daughters remained in quiet repose as we snapped our cameras like paparazzi.

We left the cats to their naps and set out to explore more of nature’s most splendid creatures. We spotted waterbuck with their distinctive toilet seat markings, and red lechwe antelope with sweet brown eyes. A cruise through the flood plain cut through by a meandering river garnered sightings of two lethargic crocodile sunning on the shore and a monitor lizard slipping into the drink. A couple of secretary birds strolled by and an elegant grey crowned crane poked in the grasses. The ubiquitous hornbill birds lifted at our approach.
As I rode shotgun next to Cowboy, the sun warmed my legs while a cooling breeze carried the scent of sage, and shimmering grasses of the savannah tickled my nose. I felt every bit the bush bunny. My heart swelled with joy as we rolled along on the warren of dirt roads then bounced off-road to take a closer look at a critter or bird of interest.

Independent from Britain since 1966, democratic and prosperous Botswana has a population of some two million people who reside mainly in the northern sections of the country that is not encroached upon by the Kalahari Desert sprawling over 80 percent of the land. Good leadership in this land-locked republic provides universal education and medicine for the people and conservation measures for the last remaining wild herds of elephants, buffalo, zebras and more, along with 400 species of birds. The flag of Botswana has black and white lines in the middle of tender blue—the color of the pollution-free skies. It speaks of the good relations between races. 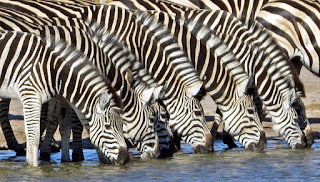 The zebra with its bold markings is their symbol of unique pride and unity. Botswana stands as a model for other African countries trying to re-establish themselves after declaring independence from colonial powers in the 1960s.

Note: This is a first in a series of articles detailing the Ultimate Safari experience with Overseas Adventure Travel, aka OATS, in the countries of Botswana, Zimbabwe, and Zambia. There is simply too much ground to cover in one article. First published in National Association of Baby Boomer Women.
Posted by lindaballoutalkingtoyou at 9:54 AM No comments: