Would you trust this man with your life? 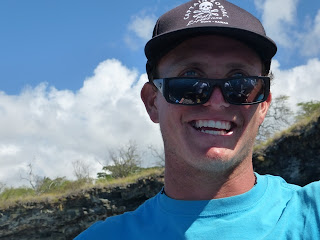 We blasted across cobalt blue swells with Captain Zodiac on our way to Kealakekua Bay, one of the top ten snorkeling spots in the world.  Our skipper had a demonic gleam in eyes as we shot out to open waters. I bounced a foot, or two off the seats of our rubber craft holding on to lifelines to avoid being dumped in the drink.

“Land is the other way,” I yelled over the roar of the outboard motor.
“Thought you might like to see some whales.” he said with a sly smile.
After spotting a few flips of tales in the distance, he careened the boat toward the shore of the Big Island where jagged black walls of crusted lava meet the sea.  Our captain slowed the engine as we glided into the serene bay where Captain James Cook met his demise at the hands of Hawaiians. We were greeted by about a hundred petite spinner dolphins doing back flips, triple spins and riding in our wake five abreast! He cut the engine and told us to jump into the translucent waters teeming with sea life in front of Capt. Cook’s monument. Below the surface a colorful array of fishes going about their business in the pristine coral reef didn’t seem to mind the big-footed fish padding above them. A moray eel slithered into a crevice making himself invisible to passersby.  A lone turtle swam through the underwater scene where I spotted rainbow parrot fish, wrasse and clouds of bright yellow tang. 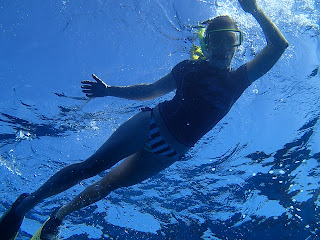 Once back on board we were told that the walls above the bay are filled with the bone of great chiefs. A young boy was lowered on a rope to place them there. When the deed was done, the rope was cut and the boy plunged to his death.  He also explained with accurate and vivid detail why the great navigator was stabbed in the back.  I was glad that his rendition supported my theory that it was justifiable homicide.
Enough talk. Next, we were off on a full-throttled ride on the back of huge swells crashing into caves and blow holes sending huge plumes of white into the sky.  An abrupt halt in a small crescent bay brought us to a fierce looking rock face attached to a reclining torso said to be an altar where sacrifices were made to the volcano goddess Pele. 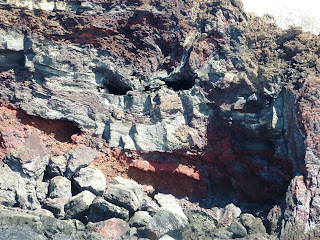 Jack, our second in command, lay prone to help us imagine her voluptuous outline.  I’ve done more research than I should into sacred sites on the Big Island and this one was news to me.  I was very excited to make this discovery, but I think it might have been a story our Captain thought would make for a more exciting ride. This spectacular day with Captain Zodiac is part of the all-inclusive “Un-Cruise” Adventure holiday aboard the Safari Explorer. 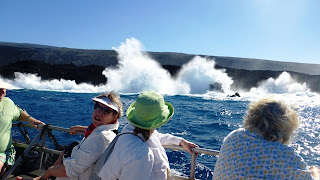 
Posted by lindaballoutalkingtoyou at 9:37 PM No comments:

Life Beneath the Apple Tree in Descanso Gardens 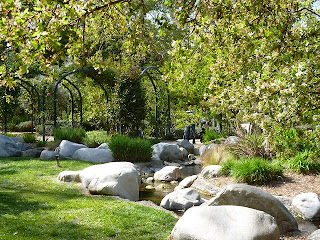 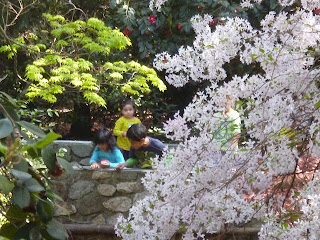 
Listen to my story.
The clang of the tiny train,
The squeal of children on board
As it winds through shady glens
Brightened with shocks of pink.
Blossoms perfume the air 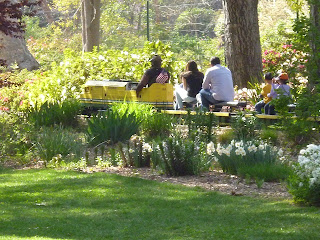 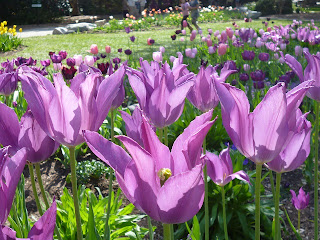 Posted by lindaballoutalkingtoyou at 9:04 PM No comments:

I am pleased to host the Armchair Travel Book Club  on Wednesday, April 24, 7 PM – 8 PM in Malibu at the Bank of Books.

I selected Hold the Enlightenment, by Tim Cahill, for my first selection because Cahill’s style is conversational, entertaining, well-researched and often LOL funny. Tim, one of the founding fathers of Outside Magazine, says his stories are about "remote destinations oddly rendered."

To Learn More go to www.BankofBooks-Malibu.com and click on Book Clubs