Un-Cruise Highlights on Around the World Travel TV 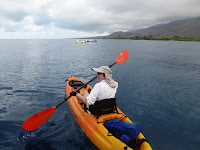 I was most pleased to be guest on Around the World Travel TV/Radio.  In this interview I share highlights of my “Un-Cruise Adventure” on the Safari Explorer in the . The journey begins at Lana’i, the sweetheart isle, with whale watching on the way to Maui, a hike in the the sacred Halawa Valley on  Moloka’i and snorkeling at the foot of Captain Cook's monument in Kealakakua Bay on the Big Island.   These are just a few of the incredible experiences to be enjoyed in this all-inclusive holiday. This video is just my segment. For the complete program go to www.atw.tv archives.

Moloka'i Welcomes the Safari Explorer to her Shores


Moloka’i, a small but majestic island in the Hawaiian chain, has remained aloof since the days of old. The north shore’s monster surf crashing against the highest sea cliffs in the world have kept many a visitor away. But, around 650 AD early Polynesian voyagers guided here by the brightest star in the heavens discovered the verdant framed in protective cliffs. They lived in the valley in splendid isolation for about 900 years evolving in distinctly different ways than migrants on the other . Moloka’i became known as the . It was the go to place if you wanted to enlist the services of an “ana’ ana” priest to send a malicious spirit on an errand, or to pray your enemy to death.
The road to Halawa traces the southern shoreline and provides views of fish ponds constructed by early Hawaiians. They engaged in sophisticated aquaculture and built over seventy-three fish pools enclosed in rock walls along this coast that is protected by the longest reef in U.S. waters. Hina, the moon goddess said to be the mother of Moloka’i, watched over her people and made sure their fish ponds were full. The road starts to climb and becomes a heart-catching one-lane highway overlooking a vast expanse of cobalt blue before descending to the valley floor. 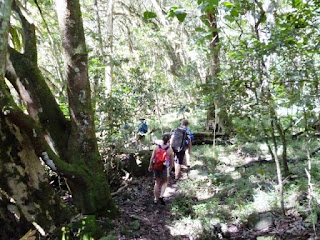 Our group from the Safari Explorer was greeted by a Hawaiian elder who sounded the conch and provided us with offerings wrapped in ti leaves to be placed on an altar. He then honored us with a traditional “honi” greeting before we were allowed to enter the sacred valley. As we hiked up the ancient path shaded by a canopy of enormous vine ensconced mango trees, we passed by the rock walls and terraces built by the early settlers. After a picnic and a dip in the pool beneath double-tiered Mo’oula Falls we reluctantly headed back to our home for the week.

That evening we enjoyed a gracious buffet of local culinary treats, authentic music, and a prayerful hula at the Moloka’i Museum and Cultural Center. The people of Moloka’i have staved off over-development and want to retain their Hawaiian heritage, but are opening their hearts to visitors. The 150-foot Safari Explorer, with a limit of 36 passengers, enjoys an exclusive relationship with the people of Moloka’i who do not allow any other cruise line to dock in their harbor. There is only one hotel on the island and the restaurant in it is closed for remodeling.  The “Un-cruise Adventure” which includes two days of exploration on the island is by far the best way to see the wonders of Moloka’i.

In my travel collection Lost Angel Walkabout, I have more about the land of Mo'o!

Posted by lindaballoutalkingtoyou at 10:41 AM No comments: