Doing it My Way on the Hana Highway 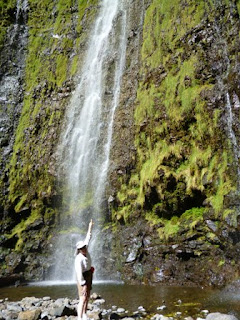 The highway to Hana, Maui should be listed as another wonder of the world. Each day thousands traverse the narrow road that hugs the coast of southeast . It is a miracle that the over fifty one-lane bridges, many of which are over a hundred years old, don’t collapse beneath the steady stream of cars. Drivers are rubber necking to see the most beautiful waterfall, and angling to find a pullout near unmarked trail heads to take a closer look. Pesky locals press tourists trying to take in the beauty on the unfamiliar curvaceous highway to go faster. That distracted drivers careening around blind curves don’t plunge over the steep precipice into deep gulches to an instant death is a mystery to me. 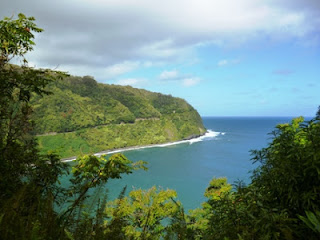 Chaos can be avoided if you do the highway my way. Make arrangements to spend at least two nights in Hana, rather than rushing in and out in one day to the Seven Sacred Pools aka O’hi’o Gulch. This gives you time to explore and make stops along the way. Fuel up at trendy Pa’ia, the gateway to Hana, where there are several good eateries. While you are there, stop at the Mana Food Store to pick up a few supplies for picnic lunches. Leave at about noon giving the rest of the travelers a head start.

Stop at the Garden of Eden about halfway into the drive. There you will find miles of manicured lanes winding through an incredible array of tropical plants shaded by the canopy of towering mango, banyan, and enormous fanning palms. Viewing platforms framed in luxuriant foliage overlook a vast blue expanse of the Pacific and stunning . I strolled through the garden in reflective solitude on a sunny day in January, peak season in the . When you leave the Garden of Eden keep an eye out for the trail head just past the eleven mile marker to the pool beneath where you can take a dip. 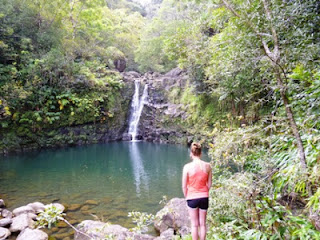 I wanted to make this journey back to what is left of Old Hawaii to revisit a time when I was in formative stages. Seeing the lush tapestry of deep ravines cloaked in deep green and spiked with orange African tulips soothed my weary little soul way back then and still does today. I dropped out of society to live on the north in 1978. I found peace there listening to the patter of rain on the leaves, lull of the surf breaking on the reef a half mile out, and waking to the chorus of birds. I remembered taking long walks on lonely beaches and just being there. I hoped Hana would allow me this once again.

There only a few places to stay in Hana: the exclusive Travassa Resort, a smattering of bed and breakfasts, or setting up camp at Wai’anapanapa-Black Sand Beach. The beach park is riddled with sacred sites, burial grounds, and caves that are easily accessed on a coastal trail that wraps the bay. Ferocious bearded monsters pummeling the black lava into sand make a dramatic show, but don’t make for safe swimming.  I found an eco-lodge tucked in the close to the beach park. The entrance to Kahanu gardens, the site of the largest and one of the best preserved heiau (temple) in the Hawaiian Islands was about a half mile from my rustic digs. You must make reservations to tour this 15th century heiau that spans three acres.

I rose early and drove through sparkling, dew-laden meadows stopping to take in splendid along the way to . I was eager to hike the Pipiwai Trail, a root and rock strewn path that traces a death-defying gorge up to the , a 400-foot plunge down a sheer rock face. A portion of the track took me though a towering wind-whipped bamboo forest that felt like being inside a giant wind chime. By the time I got back to park headquarters the tourist vans had arrived. I shared the famous Seven Sacred Pools with other travelers from around the globe. Bracing, sweet water spilling over rock ledges to form three large pools did not disappoint. I swam in the second pool that is said to “free limitations.”

The rest of day was spent lollygagging at a scalloped-shaped cove where gentle, turquoise waves curl onto a powdery sand shore. , by far the best swimming beach at this end of the world, is not to be missed

Kauai is where I fell in love with the relaxed ways of the , the warmth of the people, and beauty without end. That is where I met Captain James Cook, Kamehameha the Great, and his favorite wife Ka’ahumanu who became the inspiration for my novel Wainani; A Voice from Old . She was a royal whose mother hid in a cave here in water-rich Hana so that her child would not be killed by her jealous ex-lover, the ferocious ruler of .  Hanalei on the north , most recently the backdrop for the film The Descendants, was a sleepy, backwater when I was there. That is what Hana still is today—remote, rugged, rainy, undisturbed, gorgeous, and inhabited by a few lucky souls who want to keep it that way.

On the way back to civilization I enjoyed a diversion to the Ke’anae Peninsula. This road hugs a dramatic coastline and deposits you at a handy beach park. While sitting beneath a broad-leafed tree on a rock perch watching enormous swells cresting into foaming white against jutting lava, it became clear to me; the searing sunsets, the embrace of warm translucent waters, the endless azure skies, and the wind voices had spoken. My imagination was ignited once again by primal elements; earth, wind, fire and the ceaseless energy of sea as sure as these continue to be forged by them today— and forever will be.

Take Maui Revealed by Andrew Doughty with you. It is an excellent guide to the experience.
Hana Maui home page
http://www.hanamaui.com/