Magic of the Iao Needle in Wailuku Valley

Was it just a coincidence that the Maui Beach Hotel where I was staying sits on Kahalui Bay where Kamehameha landed in the late 1790 with his armada of Alapa warriors?  From the beach at the hotel, I can see the mouth of the impregnable Wailuku Valley backed by steep cliffs and the primordial Iao needle
piercing clouds hovering on its flank. .

I tried to imagine the scene. Hundreds of warriors landing in double-hulled outriggers wearing the red malos of war, carrying spears and short knives. They trampled over the Mauin forces that met them at this beach and then marched “onward to Wailuku” several miles inland to defeat Kahikili,
Kamehameha’s arch rival for power over the Islands. They rolled Lopeka, a cannon seized from a western sloop, up the rocky trail until they backed the Mauin forces into a corner at Wailuku. The slaughter that ensued was harsh even for the time.

Was it just chance that Kona Winds literally blew me off the beach at Paia yesterday and forced me to the venture to the sheltered valley?  When I arrived, the iconic Iao needle normally obscured by thick clouds flashed a brilliant green spotlighted by afternoon sun. The sheer 3,000- foot-pali that protect the valley sheathed in thick blue-green verdure are impossible to climb.
Water whispers sweetly through taro ponds with rust-red ti leaves on the edges creating an Eden-like setting for a Hawaiian village. Four streams merge here to form the Wailuku River that was clogged with bodies and ran red when Kamehameha’s warriors finally did conquer the Mauin forces after many failed attempts.
It seemed a guiding force brought me here to witness the glory of this valley. Was it the spirit of Ka’hahumnu who wanted me to know the beauty of this place haunted by the ghosts of so brave warriors? Was she trying to help me get the Hawaiian story right? I like to think so.

Posted by lindaballoutalkingtoyou at 7:22 PM No comments:

View from the top of a Clydesdale

I never thought I would have to use a stepladder to mount my horse, but life is full of surprises.

The Covell’s Clydesdale Ranch in Cambria is home to over 100 of these gentle giants. They offer rides on their 2,000 acres of privately owned land in the heart of the Central Coast. If you ever yearned to experience the vast green meadows framed in green fringes of forest and to know the intense beauty of early California, this is your chance.
Tara Covell will meet you at the gate and deliver you down about a mile of dirt road to the staging area. There you will meet your ever so sweet mount for the next hour or so. The bulk of these horses is intimidating at first, but once aboard you feel like you in a comfy recliner. Their stride is so huge you cover a lot of ground at a walk. The trot is bouncy and the canter feels like you are floating. Because these horses are mostly used for driving carts you are told to steer them like the handlebars on a bike.
The ride takes you through a forest of Monterey Pine  A cooling sea breeze greets you after a heart-thumping canter up a hill to a panorama you won’t soon forget. 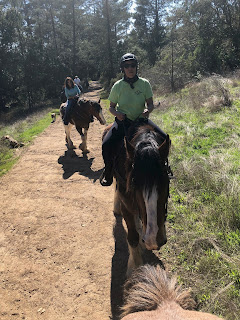 to the top of the world with an eye-popping 360-degree vista that stretches to the shimmering Pacific. You will see hawks, wild gobblers, and finches flitting through the canopy on the way. Shy bobcat, mountain lion and foxes live here as well, but they don’t come out in the daytime. 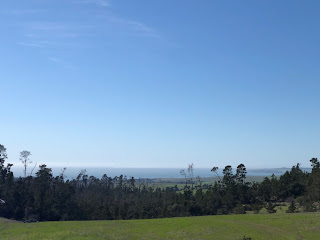 If you are not a rider, tours of the ranch are offered by owner, Ralph Covell, by request. If you get to the Cambria in the heart of the Central Coast don’t miss this special opportunity for a totally unique experience.
You must make reservations.
Covell California Clydesdales
http://www.covellscaliforniaclydesdales.com/home.html
For more adventures in Cambria Download Visit Cambria App


Posted by lindaballoutalkingtoyou at 12:26 PM No comments: