The Gift of Understanding-Kahuna Garden

A rutted road in Hana, Maui leads to the site of Pi’ilanihale, the largest remaining heiau (temple of worship) in all of Polynesia. You must cross over a creek to get to the entrance of Kahanu Garden where the heiau was hidden from sight until 1999. It is hard to believe that this immense structure spanning three acres built of basalt rocks could be so overgrown with jungle foliage that it would go unnoticed until modern times. The side facing the sea rises steeply in five stepped terraces. Construction of the main terrace dates back to the 14th century when remote, water-rich Hana was heavily populated by Hawaiians.


Our guide, also named Pi’ilani, one of 14 children in a blended Hawaiian family, explained that Lono, the god of fertility, was worshipped here for agricultural bounty.  She said, the Hawaiians were so embarrassed about the paganism in their past that they let the heiau become overgrown. They may have also wanted to spare it from being demolished like so many of the ancient sites were at the behest of missionaries who prohibited hula, surfing, and even the language in schools in the 1800’s. Perhaps, the gods did not want this structure trampled upon by disrespectful tourists. Regardless of why it was hidden from time, the people of Hana cut back lush jungle foliage that threatened to swallow the edifice fifteen years ago, revealing a monument to a race of industrious, ingenious and loving people. 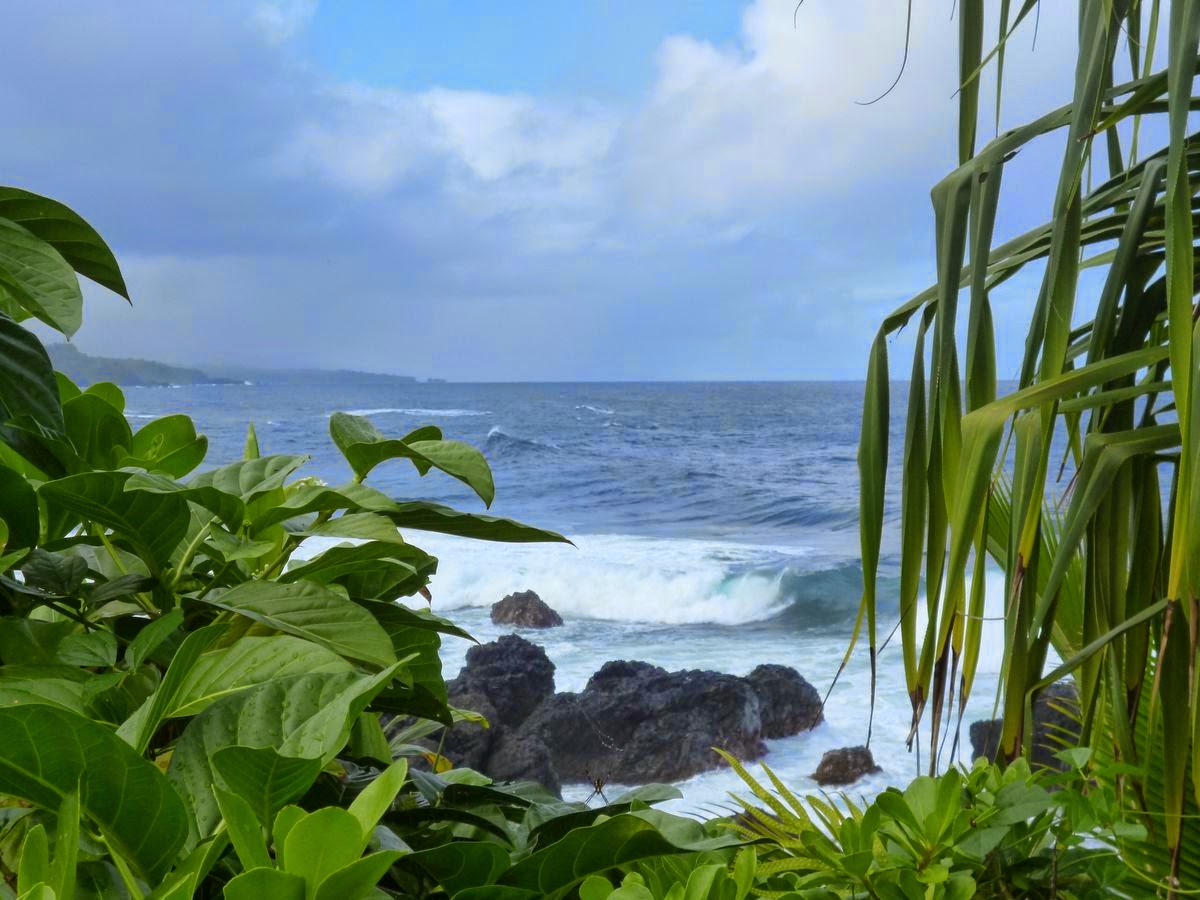 Kahanu Garden where the Pi’ilanihale is located is a flat expanse of green overlooking a tempestuous Pacific Ocean crashing on black lava cliffs. It was a landing place of early Polynesian settlers bringing plants they would need to survive. It was chosen by the ancients to be the site of the Makahiki Festival that ran for four months from November to February.  Warring was forbidden as this time of peace that allowed warriors to practice skills with contests and games. Elders played Konana, a form of checkers, and talked story while children frolicked. The tax collectors came around at this time collecting the bounty of the common people to be given to the royal class. 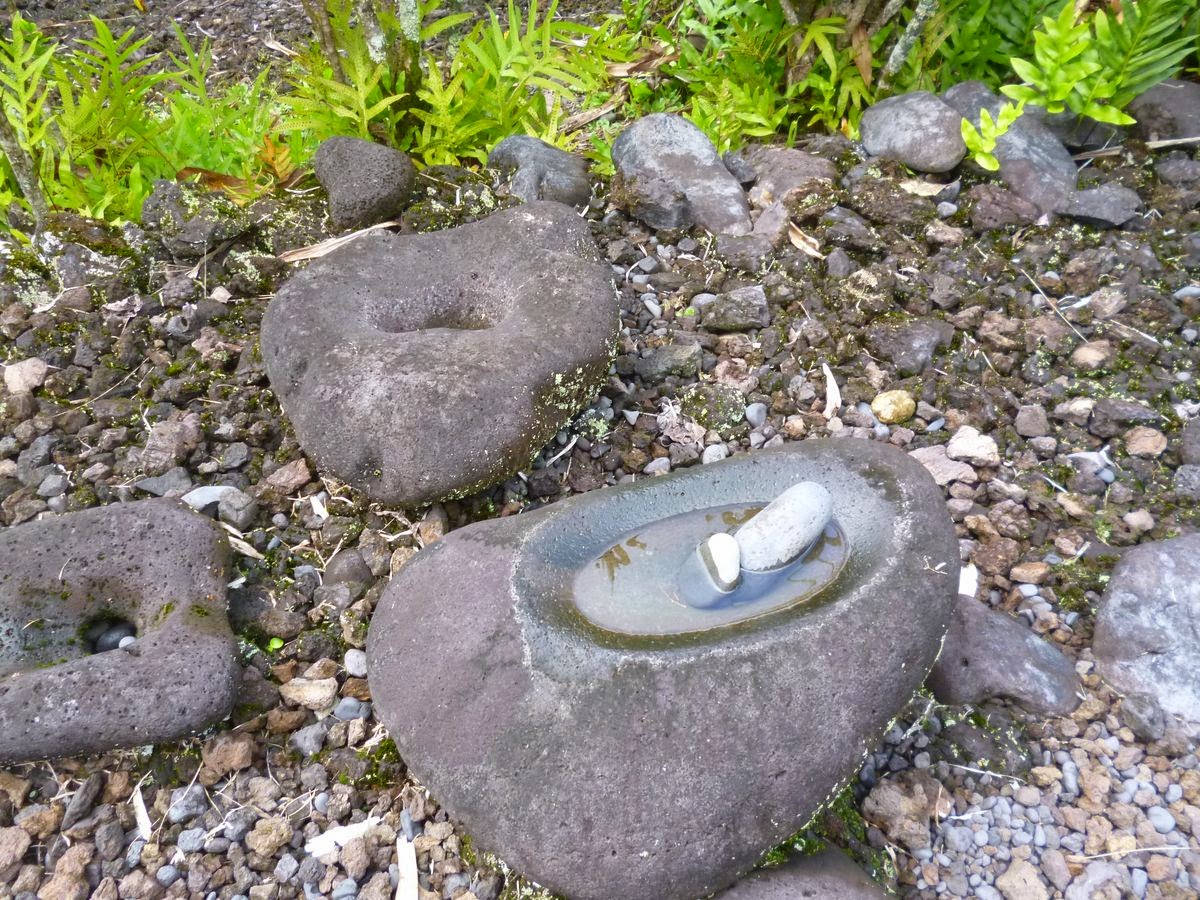 Chief Pi’ilani, who ruled here in the 16th century was beloved by his people for uniting the warring tribes of Maui and bringing prosperity in his reign.  Under his rule the Pi’ilanihale (House of Pi’ilani) Heiau that began construction in the 1200’s was completed. Rocks from as far away as Hana Bay, seven miles away, were used to finish the task.
Wandering the grounds that boasts the largest collection of breadfruit trees in the world, as well as samplings of all of the indigenous plants brought by early settlers in double-hulled canoes, you can imagine the joyous village that thrived here under Chief Pi’ilani’s rule.  Our guide, Pi’ilani, talked to us about the many uses of the kukui nut used to keep the fires burning at night. She said the day began in the evening when the work was done and people came to share what they had gathered that day in their fish nets, in their taro gardens, and fruits from the mountain trees.

Pi’ilani generously answered all of my questions about the realities of the people of old. At the end of our tour she told me she wanted to empower me with the gift of her knowledge. Instead of correcting or judging my tale of her ancestry in my novel Wai-nani, A Voice from Old Hawai’i, she told me that she understood that my work was built on what I knew. She said that she would be happy to add her knowledge, as it was handed down to her, to my pool of understanding. We held hands while as she invited us to join her in a chant to the gods who reside at Pi’ilanihale and give thanks for the bounty of the Kahanu Garden, a gift to all who find their way there.A big mahalo to my friend Lorraine Brodek, author of Nobody in a Somebody who resides in Hana, for making this very special tour possible for me.

Linda Ballou is the author of Wai-nani: A Voice from Old Hawai'i, Lost Angel Walkabout-One Traveler's Tales and The Cowgirl Jumped Over the Moon. www.lindaballouauthor.com
Posted by lindaballoutalkingtoyou at 11:26 AM No comments: