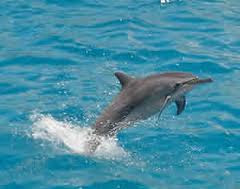 In an attempt to make the interaction between Wai-nani, and her dolphin friend Eku, in my historical novel Wai-nani High Chiefess of Hawai’i, I learned a lot about these enigmatic creatures. Wai-nani spends half of her life in the ocean, so it did not seem far-fetched that she would make friends with playful marine mammals. 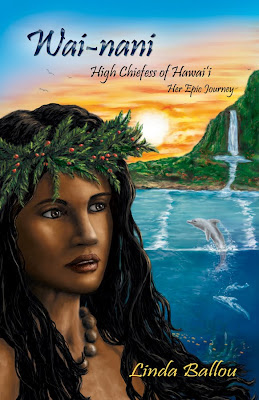 Eku rescues her from drowning when she is about ten. Dolphin rescues are on record since the time of the Ancient Greece. If they see a human drifting into a vertical position they will lift them to the surface to prevent drowning. She begins a communication with him with clicks and whistles and they form a bond. She rubs his tender belly making him tremble with delight. He in turn gives her a massage of sonic blasts that cause her to tingle all over.

As recently as 2007 a surfer in Monterey CA was being attacked by a shark and a pod of dolphin formed a protective ring around the man and drove off the shark. Our kinship with the dolphins is greater than with any other sea creature. They are warm-blooded mammals who nurse their young and must breathe air. Unlike us their breathing is not automatic. If they loose consciousness they will drown.

While swimming after a dolphin in the waters off the Big Island, I ran into the “Dolphin People.” They are a group who follow dolphin movements around the Islands in an attempt to make spiritual connections with them. There is a very large need it seems to make contact with this “other intelligence.” Anthropologist, Loren Eisley, calls it the yearning to end great loneliness of the human species....why go to Mars when the mystery of an alien intelligence is with us and it is in a pleasing, graceful energetic body.

This video called The Dream depicts the universal appeal of dolphin and how we have tried to connect with their energy and spirit.

Your comments about your own dolphin encounters are welcome.
Posted by lindaballoutalkingtoyou at 9:27 PM