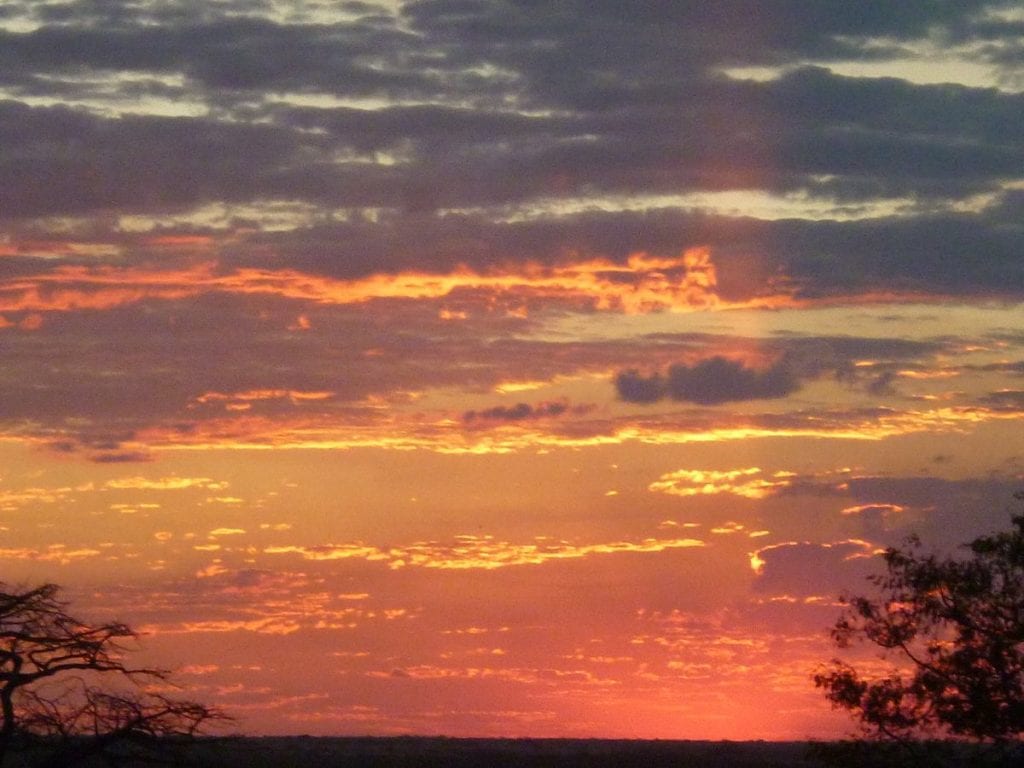 When I told friends I was going on the Ultimate Safari that would take me to Botswana, Zimbabwe, and Zambia, their first question was, “Are you going alone?”
Well, yes, but not exactly. I told them that I would join a group of 14 other travelers upon arriving in Johannesburg and that we would be sharing the 17-day adventure that would take us to four different bush camps in vast wildlife preserves.
“Don’t you feel uncomfortable being single among a group of couples?”
“Nope, not at all. I’m there to experience what can be a dangerous place safely, not to get a date.” 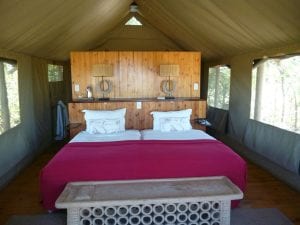 The stats are out. Solo women are the largest travel demographic in the United States. Ladies are not willing to wait for a friend or a reluctant husband to be ready for the adventure their heart desires. They are making the leap on their own.
Whatever their status: widowed, divorced, married, or single, these women are smart, curious, and immensely interested in engaging with local people and cultures.
Overseas Adventure Travel is one of the first outfitters to dispense with the solo traveler supplement that oftentimes makes traveling alone prohibitive.
Forty percent of OAT travelers (up from 27 percent in 2010) are going solo. Of all the solos, 80 percent are women. On my trip were three other solo women: one married with a husband at home and two senior world travelers who had gone to Thailand with OAT in the past. 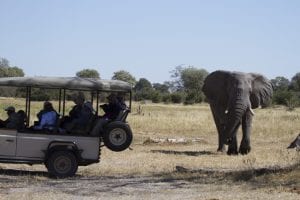 While on game drives, we shared tiered seating in open-air land rovers. Traditionally, seating positions are rotated to give everyone a chance at the best viewing.
Everyone was open and eager to meet new friends and to share the day with them. I never felt a sense of exclusion or social unacceptance. In fact, I think the couples relished the opportunity for new conversation. 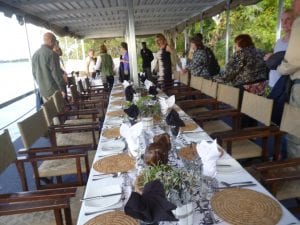 Our buffet meals were served on long dining tables that encouraged guests to circulate. Each meal provided the opportunity to get to know another guest.
“Sundowners,” as happy hours on the savannah are called, were another fun op for getting to know one another.
Actually, I had a much more stimulating social life on safari than I normally have at home. It was full of fun exchanges with fascinating people.
No, I didn’t feel the least bit alone or uncomfortable in this setting.
At the end of our journey I asked several of the women what they enjoyed the most from our trip.
One seasoned traveler who had been to Africa seven times, said she loved boating up the Kafue River from our bush camp in Zambia to fish. She needed engagement and was not content to be a passenger. She came back to camp with a mess of tilapia and a big grin on her face.
She became my companion on the Elephant Back Safari offered at the Stanley Livingstone Wildlife Preserve. As we lumbered along on our giant mobile rocking chair behind four other elephants and a gun-toting guide, she kept saying, “This is Crazy.” I knew she was loving it.
Another woman, a retired school teacher, was moved at our visit to a school in Zimbabwe where the kids danced and sang a welcome song for us. We were given time to sit down and interact with them so they could practice their English on us.
Lions are what the married, solo female had come to Africa to see. Thank goodness we came upon a pride of fourteen in Chobe National Park or she would have gone home disappointed. Tracking a pride of five in the Okavango Delta was a highlight for me. 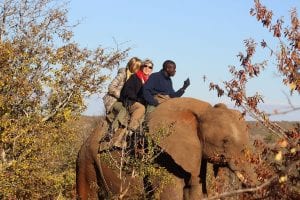 Riding shotgun while crashing through the brush on the hunt, reminded me of times with my father in Alaska. Finding a majestic male lion sleeping in tall grasses where he lazed away the day with his mate and their daughters after a night of hunting was an unforgettable thrill. 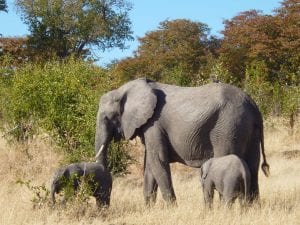 All trip guests were wowed by the power and strength of the immense numbers of elephants we saw. Heading back to the comforts of our lodge, we rounded a bend to see a wall of about two hundred of them blocking our path. What a shocking mass to behold! After the initial flurry of snaps, we moved toward crossing the channel where they were drinking.
Wise Guy (our OAT guide) cautiously moved forward with his band of seven guests as our separate band of eight trundled behind in the second land rover. As we made our way, the elephants trumpeted, flapped their ears purposefully, and stamped their “big-boy feet,” threatening to T-bone us as we forged the river.
Wise Guy stopped midstream leaving us facing an enormous matriarch who was furious because we were too close to her baby. Finally, he got us out of the way, and we surged forward as her blasting trumpet followed.
All hearts were pounding as we navigated the gauntlet of gray mountains furious with our intrusion. We left the normally docile creatures shuffling and snuffling the water feeling grateful to be alive.
Our last lunch in the wilds was at Masuma Pan, a watering hole frequented by a thirsty menagerie of animals. A parade of elephants sauntered in for a long draw at the trough, a dazzle of zebra grazed in the distance with a handsome male sable (antelope), a pod of hippo lollygagged in the water all snorting and blowing bubbles, while a rank of impala chuffed a warning sensing a cat in the neighborhood. 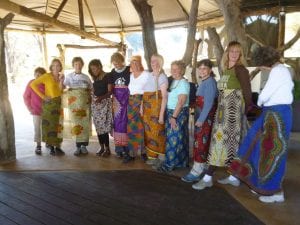 A herd of kudus with two striking males, a platoon of baboons, a crocodile, and a trio of giraffes turned up late for the party. This was a fitting finale to the all the game drives we had enjoyed in our time in the bush.
It is customary on the last night of one’s stay at a given camp that hosts build a fire in the boma and invite guests to dance with them to beat of drums.
I would hate to have missed being inside the music and feeling the warm embrace of these lively, extending people with their bright smiles because I was afraid to leave home alone.

Linda Ballou says her mission is to experience as many beautiful places on our planet as she can, before they are no more. “Travel tales relating my experiences while kayaking, horseback riding, sailing, birding and hiking about the globe have appeared in numerous national magazines.
I had a great deal of fun collecting travel stories, and profiles of people I have met in “naturally high places” for my book, Lost Angel Walkabout-One Traveler’s Tales, while my latest book, Lost Angel in Paradise is a collection of 32 of my favorite daytrips on the coast of California 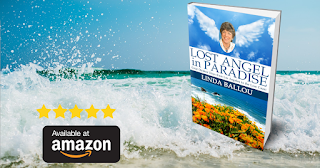 For a complete bio as well as published on-line clips with photos go to my website www.LindaBallouAuthor.com. www.LostAngelAdventures.com focuses on my travel destinations. Follow my blog, or friend me on Facebook to keep up with my latest adventures.”
Posted by lindaballoutalkingtoyou at 7:29 PM