The Best of Times with Bobo

While living on the north shore of Kauai, I got a job as a cub reporter at the Kauai Garden Island News.  This gave me access to people on the Island I found noteworthy.  Suzanne “Bobo” Bollins, who lived at the notorious Taylor Camp (1969-1978) where young people fleeing the Viet Nam war and materialism of the mainland were living out the ultimate hippie fantasies, seemed a good prospect. It was said that Bobo swam the tumultuous waters of the Napali Coast wearing only a belt with a pouch containing a dry pareau for when she reached the shore. This seemed quite a miraculous feat to me, so I made an appointment to interview her. 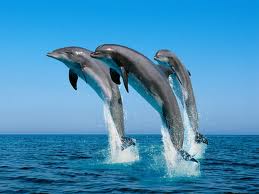 She welcomed me in her tree house abode with a glass of Merlot. She told me that dolphin often played with her on her swims from Ke’e Beach to Kalalau Valley—some eleven miles away. She said she felt their intelligence when they came close to look her in the eye.  She seemed perfectly at ease in her Spartan quarters, forerunner to the “Tiny House” movement today.  Her brown skin was weathered from the sun and a thick braid of golden hair went to her waist. Stories of the residents cavorting nude were over-stated, she told me. She was wearing a sarong tied at the shoulder in the early Hawaiian kikepa style, and said regular clothes were worn by residents in the evenings to fend off mosquitoes.
She was highly animated in the telling of her month-long stays in the valley held sacred by Hawaiians, but abruptly stopped short to announce that the lava rocks in the canvas-domed sauna just outside her door were ready. This was to be an evening of sharing with the other residents in the camp. Bobo offered me a hit off of a joint of the most powerful pot I have ever run into in my life, and asked me if I would like to join them in a ceremony celebrating Earth Mother. Curious minds want to know, so I stripped to my undies and joined the group wearing no more than their birthday suits. We sat in a circle around the steaming crimson rocks holding hands while chanting a reverberating Om.  The heat generated by the cauldron of molten rocks combined with the intense communal sharing of energy brought me to a feverish crescendo. I stumbled out of the sauna, and planted myself face down in the frigid mountain stream running through the camp to cool off.  Energy shot through the top of my head like a comet, leaving my mind as clear as the sparkling heavens above. 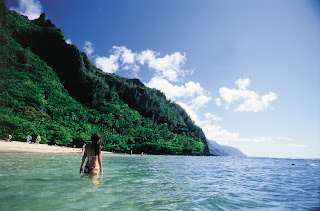 At that time, the highly romanticized camp of peace and love hippies, glorified in coffee table books today, was nearing an end. Elizabeth Taylor’s brother, Howard who owned seven acres of beach front property had originally allowed a group of thirteen disenfranchised youth from San Francisco to build their camp on Ke’e Beach. Soon, there were over 120 people, including women with small children living at the camp. The residents of Taylor Camp who did not pay taxes, lived on welfare and food stamps, soon found themselves at odds with the locals. What’s more native Hawaiians didn’t like the desecration of the Kalalau Valley by hippies camped there. It was rumored that home boys had put a dead pig upstream the week before my visit to contaminate the water and encourage the tree-house people to move on.


Still, I admired Bobo for her extreme bravery and athleticism.  At the time I did not know that I had found the inspiration for the dolphin that would be the loyal friend of my heroine in Wai-nani, A Voice from Old Hawai’i.  It is fascinating to witness how life experiences boomerang into an artist’s consciousness and appear in their work. Many Wai-nani readers view her relationship with a dolphin family as fantastic. The truth is that all of the interaction between my heroine, and her best friend--a bottle nose dolphin, is real. That is to say, I researched the behavior of dolphins and their relationship with humans throughout history to bring authenticity to the story.  A documentary film detailing life in Taylor Camp was released in the Islands. Bobo’s granddaughter, Natalie Noble, stars in the film swimming alone in the buff along the majestic Napali Coast. I suspect there are dolphins playing in her wake. 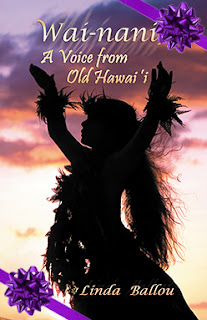 Posted by lindaballoutalkingtoyou at 9:30 AM