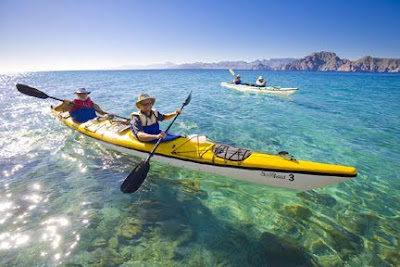 I posted the eco-alert below in my book Lost Angel Walkabout-One Traveler's Tales after the story called "Part of the Pod." My hosts on this journey, Nancy Mertz and Terry Prichard, co-owners of Sea Kayak Adventures, requested I post thier rebuttal to the statement below. No one likes to admit making a mistake, but if my research is faulty, or out of date, and the Sea of Cortez is being patrolled and protected by the Mexican Government, I am very happy to report the error of my ways.

Eco-alert:
When I took this trip a decade ago there was still an air of excitement over the formation of the Bahia-Loreto National Marine Park in 1996. This was a conservation experiment that promised set an example for the world in restoring and preserving over-fished marine environments. Shrimp trawlers that rip up the ocean floor and kill everything in their path, gill nets that capture manta ray, dolphin, seal and more were to be banned. Night fishing was outlawed and fishing permits were to be limited by PESCA, Mexico’s federal fishing agency.
That is why I am so saddened to report that not only have more fishing permits been issued, officials are not enforcing the law. Illegal shrimp trawlers and gill nets continue to rape the sea once “ferocious with life.” In addition, an even meaner threat has been added to the brew. The inshore reefs for the most part are totally barren. About 7-8 years ago, Hooka divers began scouring the remaining pockets of the reefs to capture what is left of the small reef fish. Once located the divers herd the fish into monofilament gillnets. Many of the larger parrot fish, and cabrilla didn’t get caught in the nets. So, about 6 years ago “Pistolero” came into play. These divers shoot the larger remaining fish at night with spears. They also take lobster, octopus, snails, and clams. These methods are effectively clearing the reef of any living creature that can be eaten.
Locals say that the fish have declined 90% in the last ten years. They know that without the time to reproduce there will soon be no more fish left in the sea. It is easy to demonize the Mexicans who seemingly have no regard for the natural wealth bestowed upon them. Local enforcement looks the other way if bribed, poverty stricken locals do whatever they have to do to survive and PESCA defends their environmental policies saying they are doing everything they can to save the Sea of Cortez. However, like the drug trade fueled by demand by northern Americans, so is the illegal over fishing encouraged by the enormous demand for seafood in the United States.
Can the Sea of Cortez, once the most nutrient rich nursery for all manner of marine and birdlife be revived? Not without the help of organizations like http://www.seawatch.org/ the National Resource Defense Council http://www.nrdc.org/ and http://www.oceana.org/ that continue efforts to prevent the death of all life in the Sea. But, I don’t think there will be a real solution to the abuses to marine life until there is an international agency with the funds to patrol our oceans and the authority to enforce environmental laws, but in the meantime we can support these agents of change.
Rebuttal:
We want to let you know - since 1996 when Loreto Bay became a national marine park, things have VASTLY improved there, they have rangers regularly patrolling it for poacher fishermen, etc. And, now it is a UNESCO World Heritage site as well.We have not heard the shrimp trawlers strip mining the water column in years and years. The waters have become even more regulated, so now you cannot use a jet ski in the park, nor can you set up semi-permanent basecamps with generators (which is allowed on Isla Espiritu Santo off La Paz city 5 hours drive south of Loreto). La Paz and Loreto are really the only good kayaking spots with islands to camp on, thus of the two, Loreto is really the only pristine camping left, and many committed local environmental and tourist organizations are determined to keep it that way - very heartening. We have seen whales coming back in greater numbers, both in Baja and in BC Canada since we've been in business (1993) so that is good too. Also, since you were there, the Mexican government is now strictly regulating and protecting the three gray whale calving lagoons on the Pacific coast - Magdelena Bay to the south, 2 hours from Loreto, where we operate, San Ignacio and Guerrero Negro.No one can kayak with the gray whales or bring their own motorboat any longer - during calving season in Feb, you must go with the government-licensed cooperative that runs skiff tours 2 hours at a time among the gray whales. So we have witnessed vast improvements since we first wre in Loreto. I am happy to discuss any of the latest happenings with you. Warm regards, Nancy tollfree 1-800-616-1943
Posted by lindaballoutalkingtoyou at 10:34 AM