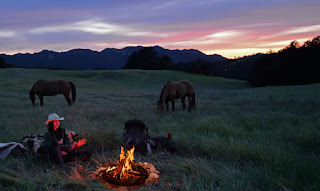 Topanga’s own, Gillian Larson, is the youngest woman to ride the entire Pacific Crest Trail form the border of Mexico to Canada. Not just once, but twice, she met the challenge  on the 2,660 mile journey that include snowdrifts, downed trees, trails eroded from avalanches, bone-chilling temperatures, adjusting to altitude, landslides and rattle snakes. But, the greatest concern for Gillian was providing enough nourishing feed and water for her two horses. All of these challenges were met with a pragmatic and well-thought out approach that she shared in her talk at Malibu Creek State park hosted by ETI Corral 36. 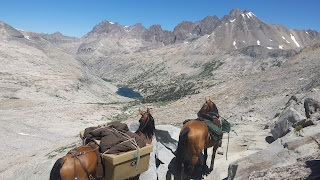 Although 1500 hikers yearly attempt the entire PCT, only a handful of riders have succeeded. The logistics for equestrians are complicated.  Gillian bought a pack saddle and learned how to pack, weigh and tie the panniers to her pack horse. She studied maps and downloaded GPS guides. But, the real learning curve took place on her first attempt in 2014 when she was just 22. In 2016 she applied her hard-won knowledge of the trail and made notes about the best grazing and watering stops she hopes to share in a guidebook for equestrian. 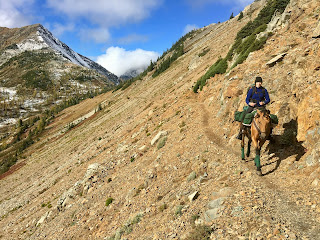 The first 700 mile of the trip from Mexico to Kennedy Meadows on a narrow track tracing a ridge overlooking Anza Borrego desert is dry, so water is the main concern.  In the High Sierra’s where the John Muir Trail, and the Pacific Crest are the same, for 211 miles snow drifts were a major challenge. I was especially interested in how she handled this part of her trek as I took a horse pack trip into “The Range of Light” that inspired sections of my novel The Cowgirl Jumped Over the Moon. I suffered from altitude sickness and temps that dropped into the 20’s at night in this celestial region where spires poke 13,500 feet into azure skies. Gillian said altitude had little impact on her, or her horses as it is a gradual climb from the floor of Owen’s Valley and she gave her horse’s day lay-overs along the way.

When she entered Oregon over the Bridge of Gods she ran into fickle weather and more snow pack. Washington proved to be magnificently beautiful, but brutal with many log jumbles blocking her way. Still, she pressed on making friends with hikers, and other generous folks along the way. I admire this young woman for having done something that I only dreamed of doing. I tried to capture the celestial beauty of the rugged spires in my writing, but Gillian is the real deal.

Linda Ballou, author of The Cowgirl Jumped over the Moon, loves seeing the world from the back of a good horse. Read articles about horse treks, guest ranches she has enjoyed and more about her book at www.LindaBallouAuthor.com 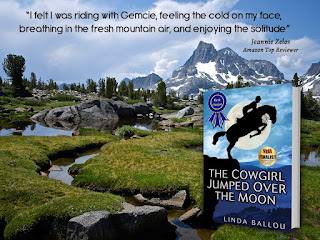 Posted by lindaballoutalkingtoyou at 11:43 AM