Cowgirl Goes Down Under with Christine Meunier 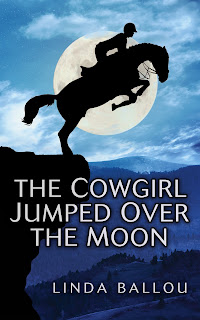 Since publishing The Cowgirl Jumped Over the Moon I've enjoyed connecting with other horse people around the Globe. Christine Meunier is an accomplished rider, trainer and author of horse books who lives in Australia. She was kind enough to give Cowgirl a 5-STAR REVIEW! I wanted to know more about her so I asked her a few pointed questions.

Christine was introduced to the wonderful world of horses at the late age of 13 when her parents agreed to lease a horse for her. She started experiencing horses via books from a young age and continues to do so, but recognizes that horses cannot be learnt solely from books.She has been studying horses from age 16, starting with the Certificate II in Horse Studies and is currently undertaking her Bachelor of Equine Science via distance education.
Christine has worked at numerous thoroughbred studs in Australia as well as overseas in Ireland for a breeding season.
She then gained experience in a couple of Melbourne based horse riding schools, instructing at a basic level before heading off overseas again, this time to South Africa to spend hours in the saddle of endurance and trail horses on the Wild Coast.
Particularly passionate about the world of breeding horses, she writes a blog about equine education which you can view at Equus Blog.

What inspired you to write your first book?
I have a history of working in the horse industry and loved to tell friends and family about events that occurred over the years.  My mother would often laugh at some of the incredible moments and told me, “you should write this down!”
Over time, I did, and started to develop an idea for Horse Country – A World of Horses, my debut novel.

How much of the book is realistic?
A lot!  Horse Country focuses on 4 women working in the horse industry and their daily working lives.  The idea was to introduce those wanting to work with horses, to the idea of what their working life could look like.
It spans a 6 year period and covers the seasons in Australia and in the UK.  Two of the women work with breeding thoroughbreds and the other two instruct horse riding.  It’s based a lot on my own experiences and travels.

What books have most influenced your life?
My favorite book to read for a horsey theme and enjoyment is the Silver Brumby. I think it truly developed my love of horses, reading and writing.


The most influential book in my life is the Bible and it is something I read on a regular basis and over and again.  It’s practical, relevant and has an awful lot of good advice!!

Are there any new authors that have grasped your interest?
Many over the years!  I am often asked to read and review horse books on my Equus Blog and have come across many debut writers that I have loved.  They can be found reviewed on my blog, or on Goodreads.

What are your current projects?
I have just recently published the fifth book in my Free Rein series, titled A Dollar Goes a Long Way and am working on making this known.
I am also working on two adult novels that are horse themed.  One started writing itself two months ago and focuses on a single mum who is employed to cook for a trail riding business; the other is about a woman who moves to a tropical island to live with her husband and decides to introduce horses to the island and set up a trail riding business.

Do you see writing as a career?
I do!  Not just of novels, but of many things.  I love to write novels, horse courses, educational resources and about horse careers.  Each of these loves of writing is generating a small income (at this stage!).  I am working to increase it to a reliable income.

Can you share a little of your current work with us?
I can!  This is a rough draft of a novel that decided to start writing itself.  I was rapt to get the first 50 pages in a couple of weeks.

***
It was a nice place where Ben worked.  Good physical work, great views and accommodating bosses.  He definitely couldn’t complain.  And to be honest, if he could, it tended to be toward the end of the season when he’d had enough of clients, but that didn’t matter – he was moving on in a short while by that stage.
The business – Happy Trails – focused on providing just that; trail rides that customers could truly enjoy and have a good time on.  It was seasonal work, running through the spring and summer months with a break in February due to the heat, then back on for the autumn months and slowing down over winter.
Generally this meant one of two things for Ben – he did maintenance odds and ends in the early mornings and late evenings of February and then went back to taking clients out over autumn,
or he headed off for a break and a scene change at another job an hour down the road until spring came around again.
Ben enjoyed his work with Margaret and Peter – the owners and managers of Happy Trails – but he also enjoyed that he could go off and carry out another job for a spell before coming back to the busy but laid back environment of trail rides.  He’d been working this way for the past five years and nothing had changed much over that time.
Margaret and Peter worked hard to keep any staff that they liked – encouraging them to travel and gain other skills in the off season – but always maintaining that there was accommodation, food and a job waiting for them when the riding season started again.  Ben liked it that way.  He knew where he stood, and he knew the people he worked with.
There was one other regular trail guide – Jake – and a handful of part timers who helped care for the horses and occasionally came out on a trail ride with clients.  As much as you had to be ready for anything with horses – you never knew what the day would hold even though you could plan what you would like it to include – Ben was averse to change.
He found he could handle random events that occurred with his equine friends – a sudden lameness, a client falling or a horse running away with him – but he wasn’t the same with people.  He liked them to be predictable – and more often than not – he liked them to leave him alone.
Even though he dealt with strangers six days a week, he felt no obligation toward them other than a safe and enjoyable ride.  He didn’t need to build up an ongoing rapport with them or become their best friend.  He could just answer questions; tell them about the horse they were riding and point out the highlights of the surrounding countryside.
That was enough for him.  In fact at this point in time, it was all he wanted.  He couldn’t shake the feeling that things were changing though.  Ben glanced up from the girth he was tightening on Red, a trusty chestnut gelding often used in trail rides on the farm.
He’d noticed the female figure flitting between the large vegetable garden and the main farm house a few times over the past couple of days.  He figured she was a relative of Margaret and Peter’s, or something equally as boring.  It didn’t really matter; she was just another figure that was showing up from time to time and therefore a part of his day.  Granted, she appeared to have something about her from a distance.  But what appeared good from far away often had faults that were obvious up close.
Red stamped his foot impatiently, snorting at the stationary figure beside him.
“You’re right, mate.  Stop sleeping on the job,” Ben said as he slapped the horse affectionately on the shoulder and then said, “thanks for the wakeup call.  Let’s see if we can’t get another few horses tacked up before Jake finally gets out here.”

Do you have to travel much concerning your book(s)?
Not at all!  The internet is great for any research that is needed, but I have found that most of my ideas have come from traveling not planned for books!  Any trips I have taken or moves I have made for work related reasons, have resulted in fodder for writing!

Who designed the covers?
For Horse Country I got a professional graphic designer in the form of Graphic Design City, although the photo is one of mine from work.  For the Free Rein series, my husband and I decided to try designing and we’ve done this with photos taken by Cait O’Pray.

Posted by lindaballoutalkingtoyou at 9:28 AM