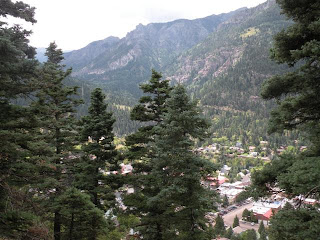 The head-spinning stretch of the San Juan Skyway between Telluride and Ouray is flanked by thousand-foot sandstone formations carved by a river lined by willows. I pulled over at the Dallas Divide unable to pass by the breathtaking sweep of rusty sedges at the base of Dallas Mountain. Its flank was clad in velvet green pine splotched with aspens spinning gold and its ghostly peak pierced tender blue skies. I took a moment to breathe deeply of our fast vanishing American Heritage.

The promise of the mineral hot springs held sacred by the mountain Utes for their healing powers pulled me forward. The Ute Indians, unlike the sedentary Pueblo peoples, were nomadic hunters and gatherers that dominated this lofty realm from1500AD until 1873 when they were overrun by gold-thirsty miners. Each spring when the Utes arrived in the Uncompahgre River valley they performed the Bear Dance celebrating rebirth-a coming out party for all of Mother Nature’s rich gifts. They also enjoyed the healing vapors in the cave that is now overseen by the owners of the Weisbeden Lodge in Ouray. You can pay to visit if you are not staying at their inn. The town is named after the great Chief Ouray who wisely led his people out of the valley when he realized they were out matched by the lure of the rich mineral deposits in the mountains held sacred by his people. There is a museum in nearby Montrose that honors him and is worth a visit.

Posted by lindaballoutalkingtoyou at 10:33 PM