My stated mission is to get to as many beautiful places as I can before they are gone!

This would include witnessing the wildlife that is quickly moving towards extinction as a result of exploding human populations. With so much negative news on the wildlife in Africa conservation front, I was getting depressed and afraid that I am already too late. But, Nova delivered a very heartening documentary about plans in North American and in Africa to create wildlife corridors that will enable mega fauna to traverse migration routes and to thrive once more.

It was especially exciting to learn that in the regions I am exploring in May 2016 on my UltimateSafari with Overseas Adventure Travel is are part of the KAZA area. The KAZA TFCA is an initiative of the Governments of Angola, Botswana, Namibia, Zambia and Zimbabwe. It is situated in the Okavango and Zambezi river basins where the borders of the five countries converge. 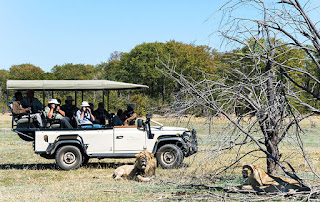 This video shows how the five countries have come together to solve the problems of shrinking habitat and hideous poaching that crosses international borders.

This model is a powerful message for all the world demonstrating how countries can join hands for the greater good of all.  It gives me hope that it is not too late for human beings to reverse the trends that have been so destructive to the creatures that make up our beautiful world. 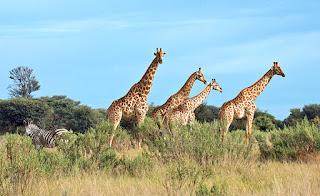 On my journey I will looking for signs that this treaty between countries is having a positive impact on animal and human populations. Full report when I return.

Linda Ballou is the author of Lost Angel Walkabout-One Traveler's Tales. See more of her articles at www.LindaBallouAuthor.com
Posted by lindaballoutalkingtoyou at 11:53 AM