Happy Birthday to Ka'ahumanu the Most Powerful Woman in Old Hawai'i 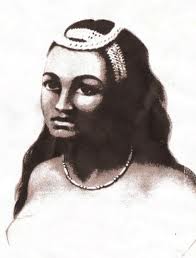 On March 17, 1768 Ka’ahumanu was born in a cave at the fortress hill of Ka’uiki in Hana. The fierce Moi of Maui, once her mother’s lover, became so enraged when she chose Ke’eamuoku over him that he set his warriors upon her parents. They chased them through Haleakala Crater, but lost them in thick mountain forests. While Ka’ahumanu was still a baby her parents fled Hana to Hawai’i where they lived in royal comfort. Wai-nani, the voice from old Hawai’i in my historical novel (1750-1819) is inspired by the precocious Chiefess Ka’ahumanu. Instrumental in ending the 2,000-year-old Kapu system and the burning of the gods, to some she is remembered as the” loving mother of the people” and to others she is the hated “flaw that brought down the chiefdom.”

Six feet tall, fiery, statuesque, elegant on the land and in the sea, she became Kamehameha the Great’s wife at age 13. He was so taken by her keen intelligence, and athletic abilities that even though a childless bride, she remained his favorite wife throughout his 40-year reign. The most beloved royals in Hawaiian lore could be seen skittering across the waves on massive koa wood boards together. On his deathbed in 1819 Kamehameha made her Kuhina Nui giving her equal weight to rule with his son.

She questioned the practice of separate eating places for women and men, defied rules restricting woman from eating eat certain foods like red bananas and pork. She questioned the authority of the priests who meted out dreadful punishments for minor infractions claiming to be living under the instructions of the gods. How courageous she was to don the yellow feather cape of ruling Ali’i after Kamehameha’s death and to sit down to eat with his son declaring herself his equal as she licked pork from her fingers.

She is not looked upon with great favor by some because when the missionaries arrived in 1820 she befriended them and converted to Christianity. She encouraged her people floundering in a spiritual vacuum to follow suit.

Ka’ahumanu stirred my imagination and won my admiration. Brave, athletic, strong, passionate, caring and centered in herself, I saw her as a forerunner of the modern woman. I was introduced to her in the 70’s during a time when women were breaking out of accepted molds. Ka’ahumanu seemed to me to be a powerful personage that embodied female empowerment overlooked by western historians. 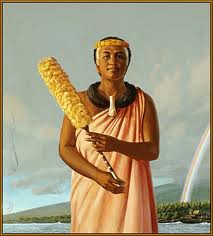 Written With Warm Aloha
In the Name of Ka’ahumanu

Posted by lindaballoutalkingtoyou at 9:40 AM No comments:

Star Publish News: Escape to Paradise: As I sit looking out the window of my office in Northeast Wisconsin , I see the after effects of our 2 feet of snow that fell on us last we...
Posted by lindaballoutalkingtoyou at 1:35 PM No comments:

Debate over whether or not early Polynesian voyagers were able to navigate their double hulled canoes back to homelands to gather supplies and recruits to colonize the Islands raged for years. The canoes paddled by the ancients were dug out from tree trunks and made from planks sewn together with cordage of coconut fiber twisted into strands and braided for strength. Cracks and seams were sealed with coconut fibers and sap from breadfruit or other trees. An outrigger was attached to a single hull for greater stability on the ocean; two hulls were lashed together with crossbeams and a deck added between the hulls to create double canoes capable of voyaging long distances. Scholars could not believe that these canoes navigated without instruments by seafarers who depended on their observations of the ocean currents, scent on the winds, clouds in the sky and messages from birds could follow these clues to an intentional landfall. Legend has it that a migrating whale led early voyagers to the Hawaiian Islands. 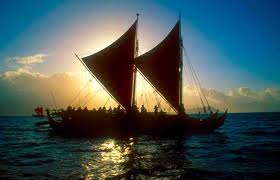 In the 1970’s these doubts where overturned when the Hokule’a, named after the “Bright Star of Happiness” that rests over Hawaii, a reconstruction of an ancient voyaging canoe made the return voyage to Tahiti. This remarkable re-enactment, chronicled in An Ocean in Mind by Will Kyselka, put to rest any disbelief about the abilities of ancient Wayfinders. The Hokule’a and her crew continue to make voyages. You can learn more about them and follow the triumphant Hokule’a on the Polynesian Voyaging Society site.

Ko’a holo moana, is an ancient voyaging heiau – sometimes called the Stonehenge of the Islands. The existence of this little known site is more proof that the “people of old” knew a great deal more about navigation than once believed. The heiau that consists of a set of standing stones that led the way for ancient Polynesian sea voyagers. It is the only heiau of its kind in the Islands. It is located at Mahukona Point near mile marker 15 on the Akoni Highway on the Kohala Coast.
Get past the incongruous bagpipe opening of this informative video by Donnie MacGowen and witness this little known voyaging heiau.